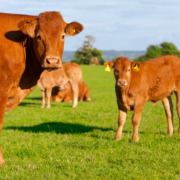 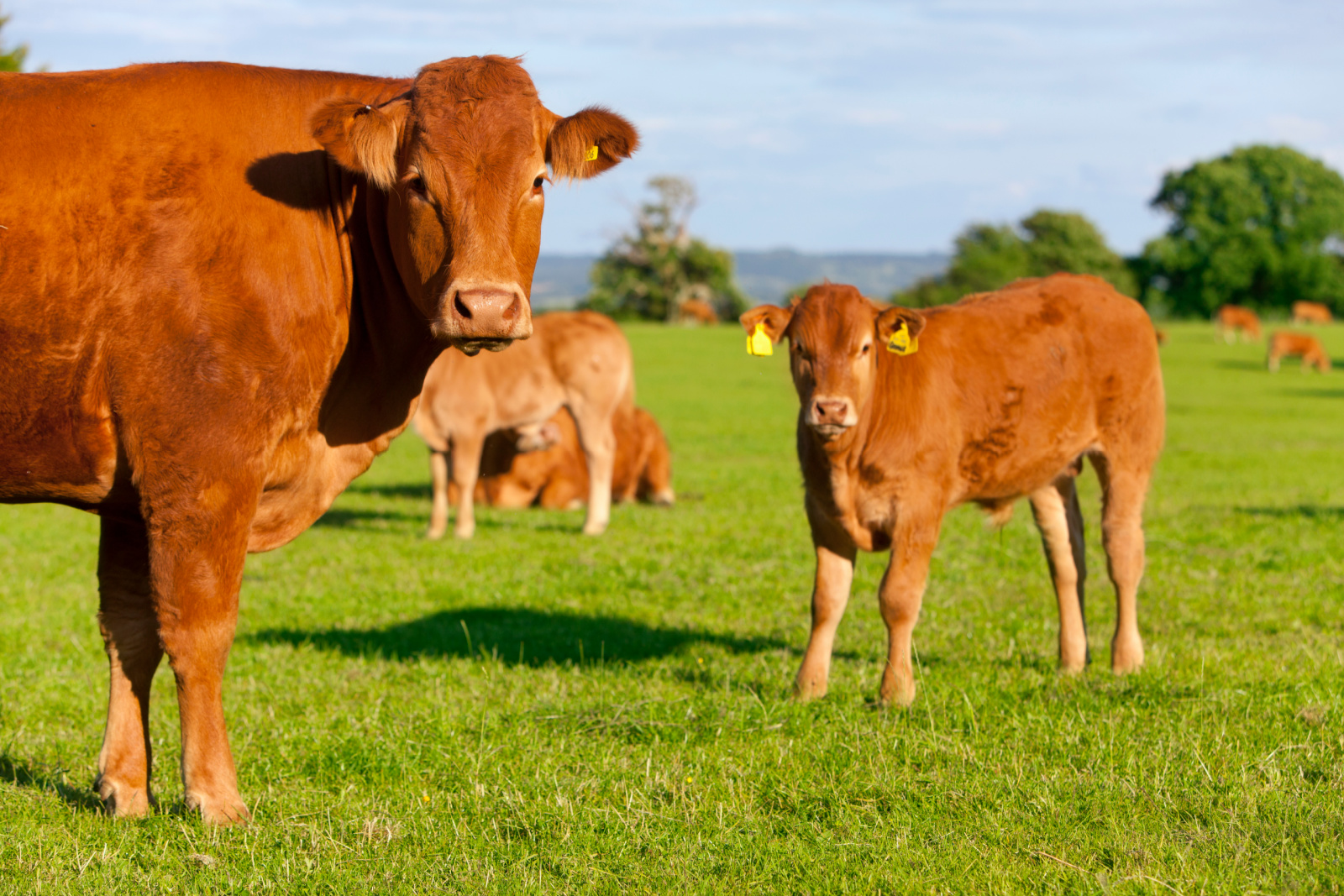 Tick-borne diseases (TBDs) are on the rise globally and pose a significant threat to both livestock and human health in Mongolia, where approximately one-third of the population still practices traditional pastoralism. Pastoralism is a form of animal husbandry where domesticated animals known as livestock are released onto large vegetated outdoor lands (pastures) for grazing, historically by nomadic people who moved around with their herds. The species involved include cattle, camels, goats, yaks, llamas, reindeer, horses, and sheep.

Livestock, which are particularly susceptible to TBDs, experience decreased production, spontaneous abortion, and death. Mongolia maintains a substantial pastoral agricultural system, with an estimated one-third of its population, practicing traditional pastoralism. As of 2020, the livestock population in Mongolia was estimated to be over 67 million, with 12.1% of Mongolia’s gross domestic product coming from the Agriculture sector.

The two important emerging tick-borne diseases are called Ehrlichiosis and Anaplasmosis. They rely on the transmission of pathogens between ticks and maintenance hosts. These diseases may present asymptomatically or with a range of signs or symptoms including elevated liver enzymes, fever, fatigue, lymphadenopathy, leukopenia, and weight loss. Infected livestock often serve as key reservoirs for the pathogens that cause these diseases and increase the risk of transmission to humans, especially amongst individuals who have frequent contact with livestock.

Whole blood samples were taken from livestock species between August 2014 and October 2015 within five districts (soums) in Mongolia. The five districts were located within three provinces; Dalanjargalan and Sainshand soums within the aimag Dornogovi, Tushig and Eroo soums within the aimag Selenge, and Terelj National Park within the aimag To ̈v. Livestock were chosen at random from nomadic herds throughout the countryside of the five soums. Samples were collected from healthy cattle, camels, sheep, goats, and horses under approved animal research protocols. Approximately 5 mL of venous blood was collected from each animal between the months of September and October in 2015 and 2016 and then sent to the National Center for Zoonotic Disease (Ulaanbaatar, Mongolia) laboratory for processing. Below are tables with the number of samples collected and selected for pathogen screening from each site and the bacterial pathogens detected in livestock spp. by 16S metagenomics and confirmed by PCR assays. 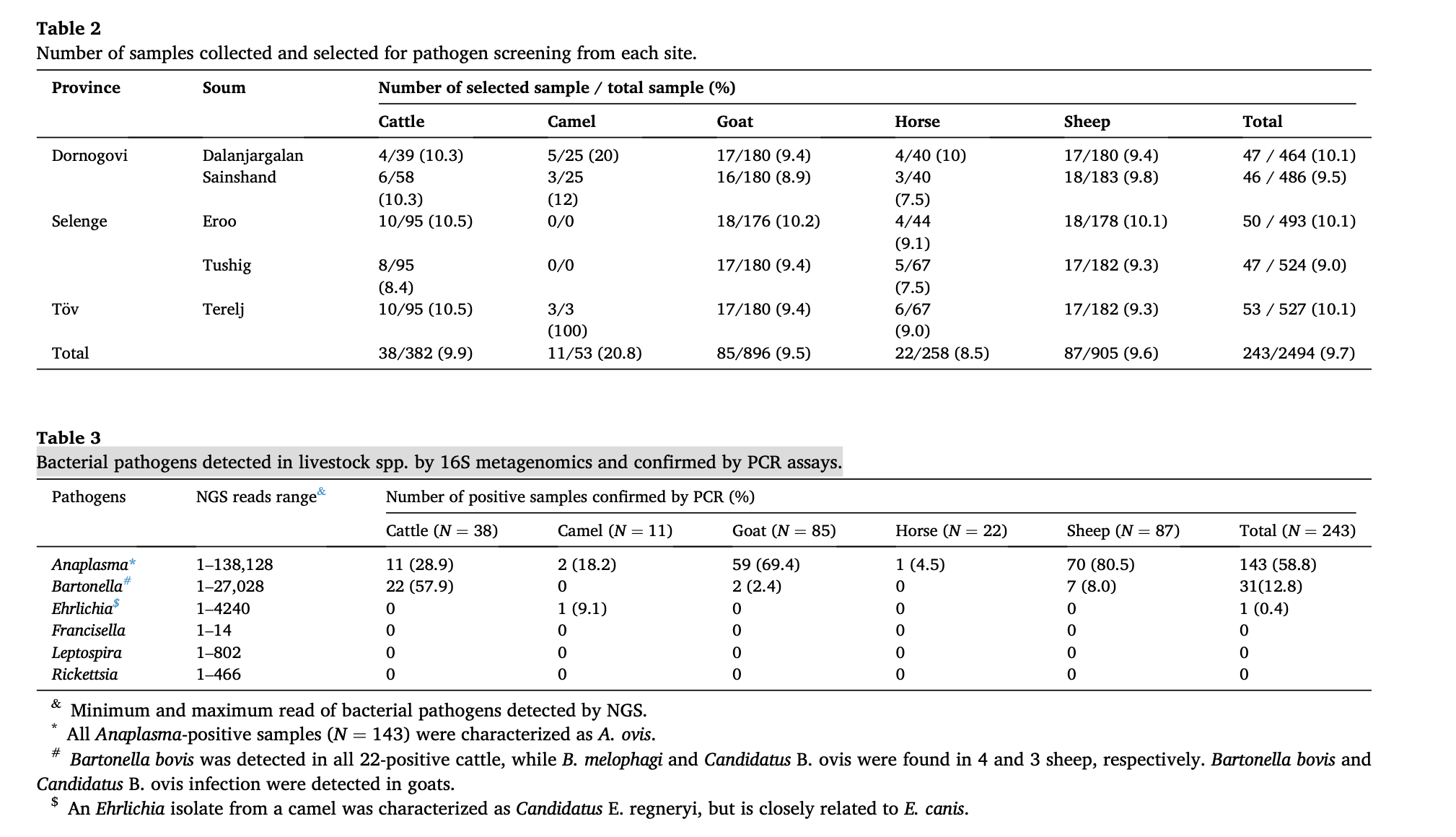 This study identified a high prevalence of Anaplasma detections in livestock, with sheep experiencing the highest burden of infection. Additional studies are necessary to further describe the clinical burden of TBDs in livestock and quantify the overall risk of TBDs in Mongolia. Efforts should also be made to conduct entomological surveys and investigate TBDs within wildlife populations to better characterize disease ecology and reservoir hosts. Tick-borne diseases are a growing concern in Mongolia given the large population of nomadic pastoralists who are at an increased risk of infection and indirect economic consequences associated with TBDs impacting the health of their livestock.