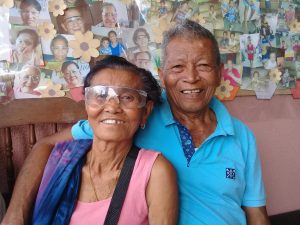 Marcela Lana and her husband are farmers in Toledo, in the province of Cebu, the Philippines. When Marcela’s husband suffered from a stroke that left him mute, she resolved to stay strong to take care of him. It was not until 2017 that she started noticing her vision getting blurry. Marcela went to a local ophthalmologist in her hometown and was diagnosed with cataracts on both eyes.

She was told that her cataracts can be surgically treated for a full recovery of her sight, but that it would cost her 60,000 pesos (approx. 1,200 USD). Because Marcela and her husband found it impossible to raise the money for the surgery, she made the hard decision to live with her cataracts, hoping that it will not worsen over time.

But in early 2018, Marcela’s eyesight got worse. Her vision became so cloudy that she could only make out the outline of people and items. She found it almost impossible to go about her daily activities such as cooking, cleaning, and getting dressed. She got burnt when she tried to cook. Slowly, Marcela lost her independence.

Marcela realized that she would need to get treatment; otherwise, she will not be able to take care of her disabled husband who relied on her. She asked her daughter to look for financial aid programs in hospitals in her hometown and the surrounding areas. They were referred to Cebu Velez General Hospital, where screening and surgical services are provided by the Mabuhay Deseret Foundation; a non-profit organization that provides thousands of free and subsidized operations every year to correct medical conditions such as cleft lip/palate, cataracts, crossed eyes, club foot, and burn contractions for underserved communities in the Philippines. Local doctors in Cebu Velez perform surgeries utilizing ophthalmology equipment donated through LEPP and partner organization CharityVision. Marcela learned that she can get surgery at the Foundation at no cost to her family – this brought her immense relief and hope.

Marcela received two successful cataract surgeries on her eyes. She says that one of the first things she did after she regained her sight was to visit her friends and family – to finally be able to see their faces, take care of her husband, and go about her day independently, and have changed her life tremendously. All thanks to medical equipment and supply donations that were made possible through the partnership between LEPP and CharityVision.

Vysnova partners with USAID’s Limited Excess Property Program (LEPP); an innovative and cost-effective program that transfers millions of dollars’ worth of federal surplus property to Non-Governmental Organizations (NGOs) and USAID Missions to supplement their development and humanitarian projects overseas. LEPP is yet another example of Vysnova’s strategic focus of cultivating partnerships that support sustainable, locally-driven development endeavors.

These LEPP donations included medical supplies such as ultrasounds, infant incubators, hospital beds, ophthalmology, laboratory and dental equipment, autoclaves, generators, laptops, computers, and school furniture. Physical capital donations to Latin America and the Caribbean were transferred to Chile, El Salvador, Guatemala, Haiti, Honduras, Jamaica, and Peru. Transfers to Asia were made to Pakistan and the Philippines; while transfers to Eastern Europe benefited underserved populations in Albania, Bosnia-Herzegovina, Moldova, and Ukraine. The majority of property transfers to Africa were made to Tanzania.

In Remembrance of Christopher Lee Reinstadtler